The Importance of Team Communication 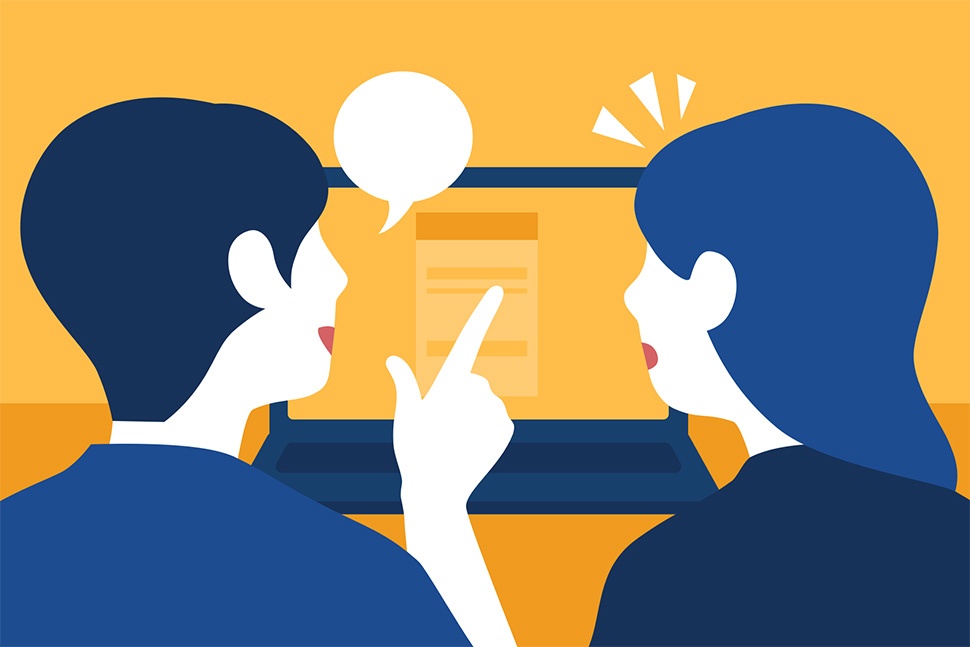 Whether you’re a designer, developer, or basically any other type of professional out there, you’ve more than likely experienced the frustration of not understanding someone else’s work because of missing documentation or a lack of an explanation. You do your best and forge ahead, making as much progress as possible. Sometime later, inevitably, you hear the words: “No, that’s not what I meant.”

Let’s be honest, despite the best tools and plans, communication can sometimes be hard, even when you’re sitting in the same office. However, communication between team members is essential if you want to avoid the pitfalls of assumptions (and we all know where that can lead). Good communication, paired with a level of interdisciplinary skills, can provide great benefit to you, your company, and the project. In our brief time together, let’s explore why this is important and how to make it better.

Let’s examine a major part of the problem. A designer hands you the image below (Figure 1) as the latest UI update for the application you are working on. What would you say Figure 1 is?

After questioning yourself (and maybe even your career choices), you probably said, “This is a white box with a red border.” You might be right, but what is it really? Is the box white or transparent? Is the red line a border, an outline, or a box-shadow? Even a simple component, without proper explanation and context, can lead to confusion and multiple interpretations.

Without knowing the capabilities of HTML/CSS, a designer is making assumptions about how this simple component is built, and without an explanation from the designer, the developer is doing the same.

Give this design to 10 developers and you are likely to get a similar visual output composed 10 different ways. Without context (defined dimensions, colors, layout next to other similar components, etc.) a developer can only go so far. The more a developer can prepare for adjustments in the future, the less likely it is that changes will need to be made and the more flexible the UI becomes. Typically we can solve for this type of problem with a style guide, but the detail can vary greatly between designers especially when more than one designer is working on the project.

Let’s look at another example. Imagine working on a project that includes a very simple component that shows a logged in user’s name (Figure 2):

Now, after some deliberation with the client who wants to know when users are online, the team, sans developers, accepts the following adjustment:

It’s a simple change, adding a green dot. It took the designers no less than five minutes to create using their favorite editing tool. However, depending on the framework, tech stack, developer skill set, time frame, and budget, this green dot could be a great thing to add or a downright nightmare. There’s also the problem of not involving the entire team. Static images and wireframes cannot answer the most important questions that should be asked. The question everyone should be asking in this scenario is, “Why weren’t the developers involved?”

As Harrison Ford quipped to George Lucas recently, reflecting on Star Wars at the 40th anniversary panel in Orlando, FL, “I said to George, you can type this… stuff, but you can’t say it. Move your mouth while you’re typing it… I couldn’t say it.” Lucas would sometimes write things that looked great on paper, but fell short of the mark when someone had to speak them.

There is no right or wrong answer about how much know-how is enough. There are people who can both design and develop equally well, and that’s great. For those of us who cannot, or don’t have the time to learn both skill sets, it is imperative that we understand each other. Communication is essential; don’t be afraid to ask questions and talk it out.

Collaboration is one of the core values at Mindgrub, and we’ve refined our process around team communication over the years. Way back in 2016, we started simple by conducting project kick-offs that brought all of the team members, designers and developers included, together to collaborate and understand the problems that need solutions. From there, sketching sessions were organized where all members used pen and paper to mock up functionality of the project. This collaboration allows everyone to lay their cards on the table and identify risks with functionality that might cause issues down the line whether to scope, timeline, or budget.

Early last year, we moved closer to an agile structure and reorganized our workspaces into pods where team members work closely together. No longer are we working in silos. All team members, including user experience architects, designers, project and account managers, developers, quality assurance testers, and marketers work together on a daily basis to ensure we’re delivering innovative solutions that focus on positioning projects for success.

When selecting a partner for your next project, make sure you put an emphasis on how closely different team members can work together. Reach out to us if you are interested in getting things started.