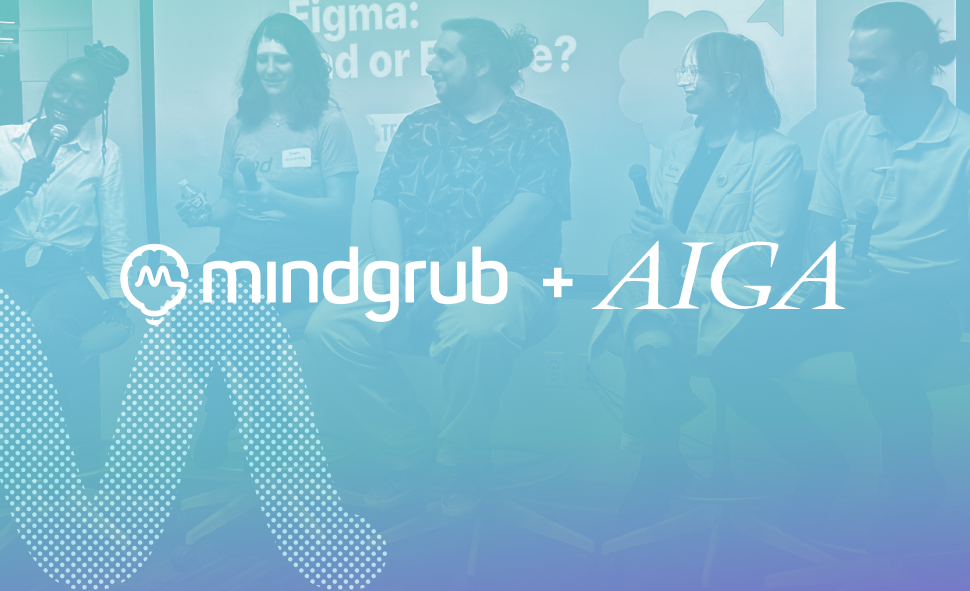 Mindgrub partnered with AIGA Baltimore to design the concept for their annual Design Month. The theme, Designing Life, focused on bringing positivity and awareness to the local Baltimore creative community and bolstered excitement for the return of in-person events.

AIGA is a nationwide organization creating spaces for those who find purpose in design. Their local chapters provide entrepreneurial agency to those in creative fields through resources, support, and connections. It was an honor working with them as their brand partner for such an amazing campaign.

As an added bonus, Mindgrub was also given the opportunity to host our own event! We put together a panel discussion centering around Figma, a design software used frequently by those in the industry.

For the panel, we enlisted Mindgrub’s team of experts. The lineup comprised of:

Watch the full panelist discussion and read a summary of our key takeaways below!

The Future of Figma

This year, Adobe successfully acquired Figma with the mission to reimagine the future of creativity and productivity. This acquisition stirred up questions about the potential changes in the software, particularly the ability to collaborate.

“Figma has always been keen on keeping the collaborative aspect of the software alive, and Adobe’s Creative Cloud can definitely bring more membership access and hopefully increase the compatibility between the two,” says Evan Reisberg.

“Figma does have weaknesses in its vector capabilities, so I’m very hopeful that with the Adobe acquisition, the illustrator vector handling can be brought to Figma [...] I know the company really values collaboration, so I don’t think that will go away.”

Staying true to Figma’s current format is an important issue for many designers, as learning new software can be tedious and sometimes unnecessary.

If a software doesn’t adapt to user-specific needs or is bought out (and then later changed) by a bigger company, designers are forced to pivot to other platforms. Because of this, it’s important to consider the potential lifespan of new software before moving forward with implementation.

“As designers, we always need to be thinking of the next thing and be ready and willing to adopt the next thing whenever it comes up,” says Emilee Beeson.

“Even if Figma doesn't last for a hundred years, it is an evolution. It’s the next generation of what we should expect from design software moving forward. I think it's a huge step forward and that's one of the reasons I'm so on board with how it is currently.”

Even though potential changes could be coming down the line following the Adobe acquisition, there is a major push from designers to have the software stay true to its intuitive nature.

Benefits of working in Figma

As Figma continues to evolve, creatives delve deeper into the added value of the software and its functionality. Namely, the ability to stay organized and see all design decisions in one place.

Clients and team members alike are able to jump into Figma to see how a design is coming together in real-time. Not only does it show project progression, but the software also allows for conversations and feedback to happen without ever leaving the platform. This means teams can work together easily without attempting to collaborate across several different platforms (such as Sketch, Slack, or Google Docs).

“When I’m working with developer teams in different time zones, it's nice knowing before I go to bed at night, they're going to be working on my file or user story and be able to see what's in progress and easily find all the details they need,” says Steph Loughran.

“I don’t have nearly as many notifications when I wake up the next morning with questions like, what is this, where is this design? They have it all in one place. It's definitely helped with different time zones and provides a different way of working.”

From a development perspective, the software makes life easier when working together with designers. This is important for both departments, as things can easily be lost in communication when working across several platforms in this highly digital work environment.

“[With a lot of the] benefits of Figma, I probably don't even realize that I benefit from because I'm not in there working with the weeds of it,” says Alex DeRito.

“As a developer, I get the styles and the designs I need and I move on. But knowing they [Figma] have put in the time to structure things with teams in mind, whether it's the component library or breaking down the designs by phases of the project we're working on, I'm not left with a ton of questions.”

To learn more about Mindgrub’s design capabilities, contact our team!